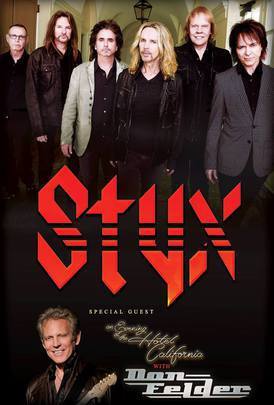 Classic rockers Styx will perform at the Volvo Cars Stadium in Daniel Island on Thursday, May 19th at 7:30 pm. Don Felder, the former lead guitarist for The Eagles, will open the concert.

The headliners are best known for their hit songs “Lady,” “Come Sail Away,” “Babe,” “The Best of Times,” and “Mr. Roboto.”

The band’s second album, Sound & Color, was released last April and debuted at No. 1 on the Billboard 200. The record’s most popular song is “Don’t Wanna Fight.” Nine of the group’s albums have been certified Gold, Platinum, or higher.

Tickets for their Daniel Island concert are already on sale here.

The Volvo Cars Stadium was previously known as the Family Circle Stadium.