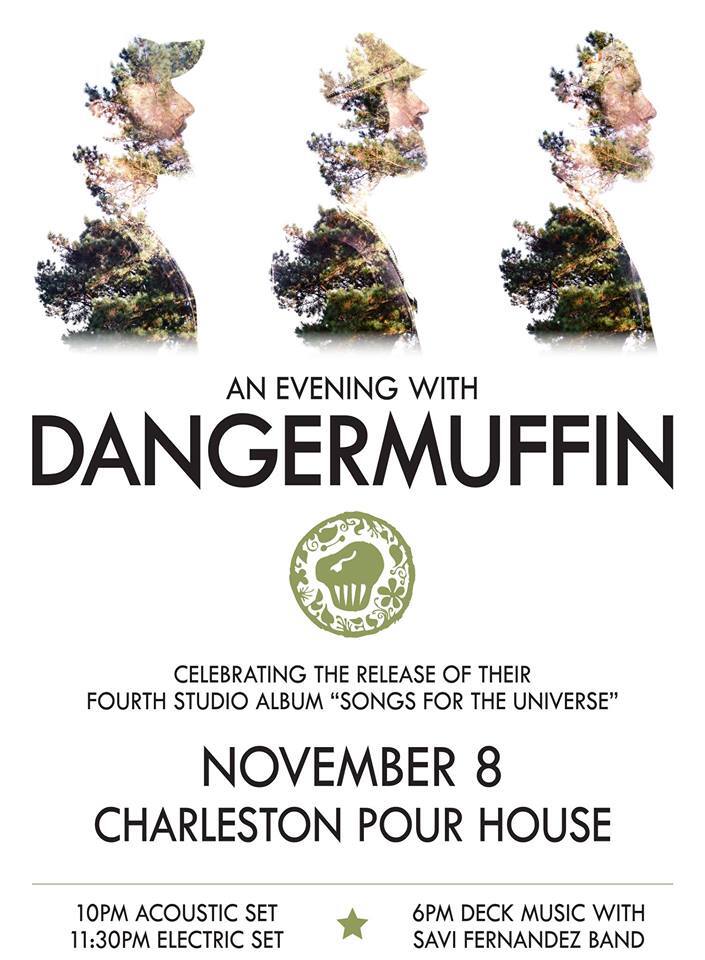 Dan Lotti, the lead singer and guitarist of the Charleston three-piece Dangermuffin, has always known about the power of music. He knew that through his lyrics and music he could be an agent of change that helped people. After three successful studio albums, Lotti and his bandmates (Mike Sivilli and Steven Sandifer) have conquered the Holy City and other parts of the south, but now they are aiming for the universe.

The trio’s fourth album, Songs For The Universe, is due out on November 11th, but will be available to Charlestonians at the CD release show this Saturday at the Pour House. The ambitious effort will include 17 new songs – the most Dangermuffin has ever released at one time – and some experimentation with the science of sound. Specifically, Lotti studied cymatics, which deals with frequency, geometry, and “visible sound.”

“We experimented with different frequencies, which seems to be sort of controversial,” Lotti said in an interview with Holy City Sinner.

He went on to explain that the entire album was recorded entirely in 432 and 444 Hz, instead of today’s standard of 440 Hz. According to Lotti, the former is the frequency that was preferred by the Italian composer and violinist Antonio Vivaldi. The band used these ancient frequencies to create vibrations that can affect the listener’s body beyond their eardrums.

“In the record, you can hear pitch shifts where we work with sound healing and frequencies that are harmonious with the human body,” Lotti said. “Math and science is at the core of everything. It shows that everything is connected. Everything is sort of vibrating and alive.”

If that all seems too heady for you, Lotti understands. He said the album’s themes and sonic experimentation would not overwhelm listeners, who can can choose to enjoy the album however they prefer.

“We’re a bridge for people to further explore the themes and science if they like, but they can still just kick-back and relax when listening. They don’t have to dig deep.”

Lotti is right – a casual listening of Songs Of The Universe brings back memories of Dangermuffin’s past work. The music feels carefree and the listener is sure to have visions of relaxing on Folly Beach with a cold brew. However, after a few more listens fans should be able to appreciate the full scope of the band’s work. It’s easy to get lost in the music as themes and archetypes begin to emerge and come into focus with each listen.

Regardless of how deep fans want to dig into Songs For The Universe, one thing is certain – Dangermuffin’s music will keep both casual and diehards vibrating through the universe.

Benefit Concert to be Held at the Windjammer