As is the case with numerous politicians, the governor’s social media accounts – Twitter, Facebook, and Instagram – are all linked together. When a post is made on one platform, it is automatically transferred to the others. Unfortunately, with Twitter’s 140 character limit, this can lead to some unintended blunders. 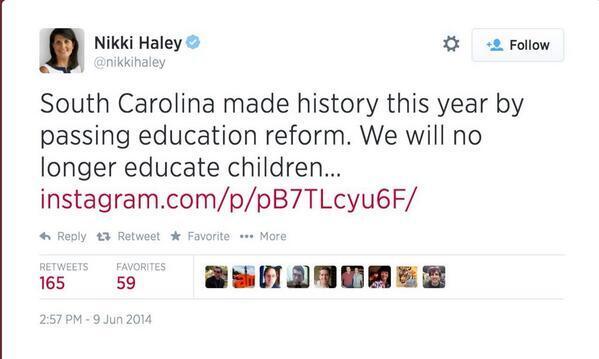 “South Carolina made history this year by passing education reform. We will no longer educate children based on where they are born. Through reading coaches, technology investments, and expanding charter schools we just confirmed that we want our children to be the future workforce for our growing high tech jobs! #ItIsAGreatDayInSC“

The message came through just fine on Instagram and Facebook, but fell a bit short on Twitter. The tweet was eventually replaced with a corrected one, but not before there were plenty of retweets.

Chris Carrabba Plays with New Band at the PoHo