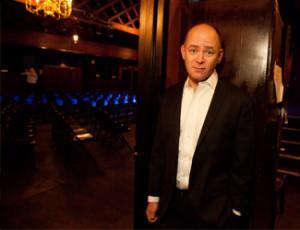 Comedian Todd Barry will perform at Theatre 99 this Friday at 10 pm.

Barry is probably best known for his roles as the “Third Conchord” on HBO’s Flight of the Conchords and the deli boss in 2009’s Oscar-winning film The Wrestler. He has also released multiple CDs, had two Comedy Central Presents specials and appeared on shows like At Midnight, The Late Show with David Letterman, Late Night with Conan O’Brien, Jimmy Kimmel Live!, Louie, Chappelle’s Show, and Sex and the City.

Tickets are $15 and can be purchased here. For more on Barry, visit his official website.

W. Kamau Bell will be “Totally Biased” at Theatre 99