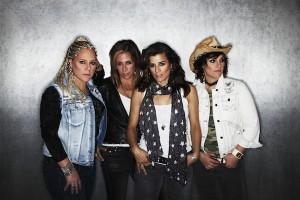 The all-female band wasted no time rising to prominence as their 2005 debut album sold 150,000 copies. They’ve showed no sign of slowing down since. The group has toured with the likes of The Rolling Stones and Aerosmith, earned a Annual Independent Music Award nomination, appeared in Billboard, Out Magazine, Buzzfeed, and the Huffington Post, and performed on The Today Show and The Tonight Show.

The band has also made headlines outside of the music world. Bassist Kristen Ellis-Henderson earned plenty of attention after she and her wife, President and CEO of GLAAD Sarah Kate Ellis, were both featured on the cover of TIME Magazine’s April 8, 2013 Marriage Equality issue (left).

For more information on the Bar Jam, click here.

In the meantime, you can watch Antigone Rising’s official video for “That Was the Whiskey” below: