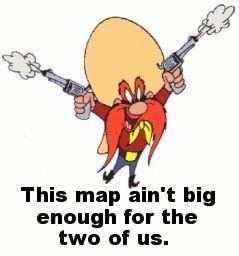 Writer’s Assumption of what Sheriff Clark looks like
Credit: GameBanana.com

After the death of Nelson Mandela, President Barack Obama ordered all flags to be flown at half-mast in his honor. According to the proclamation, flags were to be flown that way “upon all public buildings and grounds, at all military posts and naval stations…” until sunset last night.

By all accounts, every one of those entities complied with the directive – oh, except for Pickens County Sheriff Rick Clark who took it upon himself to ignore the proclamation.

Yup, someone in good ol’ South Carolina is once again embarrassing the entire state. I guess we shouldn’t be surprised, this isn’t even the first time this year that a state sheriff decided they knew better than the federal government. Back in January, Charleston County Sheriff made headlines by saying he would ignore any gun control measures he decided were unconstitutional.


Unlike Sheriff Cannon, Sheriff Clark must have had a well thought-out and logical reason for why he’s ignoring a commonsense gesture? Of course not! This is South Carolina, people!

“To show a sign of respect for what Nelson Mandela’s done, I have no problem with lowering (the flag) in South Africa,” Sheriff Clark said. “But in our country, (the honor) should be (reserved for) people…who have sacrificed for our country.”

Yup, Sheriff Clark found the completely innocuous directive offensive because Mandela was not an American.

Don’t take it from me though, read exactly what Sheriff Clark said on Facebook: “Nelson Mandela did great things for his country and was a brave man but he was not an AMERICAN!!!”

You see, Sheriff Clark thinks Mandela did some wonderful things…for a foreigner.

Sheriff Clark later said, “It’s just my simple opinion that the flag should only be lowered to half-staff for Americans who sacrificed for their country.”

You’re right, Sheriff Clark, it’s just your very simple opinion and you’re entitled to it, but know (fair or not) your choices as a sheriff don’t just reflect back on you. Your myopic view of the world perpetuates the stereotype that many Americans are woefully ignorant and indifferent towards the rest of the Earth. Not to mention, South Carolina has already spent time in the spotlight after one resident’s tenuous grasp about the rest of the world.

Lowering our flags in remembrance of Mandela was supposed to be a sign of respect and appreciation for the incredible life of a human whose leadership was so great, it continues to move and inspire people from around the world. No, Sheriff Clark, he wasn’t an American, but his words, actions, and accomplishments transcend time, culture, race, religion, and ethnicity. When was the last time you could say the same about an American politician?

It’s actions like yours that make the rest of the world scoff at our country’s perceived arrogance and xenophobia. Ironically, there was one person who wouldn’t have taken offense to Sheriff Clark’s decision and that someone was Nelson Mandela. He spent nearly all of his 95 years accepting other people’s ignorance, so I’m sure one more day spent ignoring another closed-minded opinion wouldn’t have bothered Mandela.

Barsa Named One of the Best Tapas Restaurants in the Country