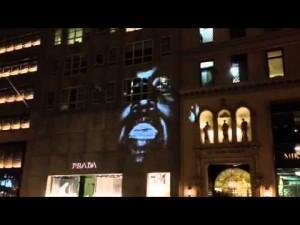 ***UPDATE, 6/3/13*** – The projections indeed went down on Saturday night. Def Jam Recordings posted the locations on their Twitter account to let fans know where the video would be played.

The video was played at: The corner of King and Cannon, 113 Calhoun Street, and Sheppard Street and King Street. The always hilarious @justhaveaseat posted a Vine of the video, which you can see here.

Rapper Kanye West has been promoting his upcoming album (Yeezus) by projecting the music video for “New Slaves” onto buildings throughout the world. According to his website, there will be one of the aforementioned projections playing in the Holy City tomorrow.

No details about location(s) or time(s) have been announced yet, so be on the look-out.

And for those wondering, Kanye himself, is not expected to be here.

West’s website says Columbia has a projection today, but again, there is no time or location listed. It appears Savannah was supposed to have a viewing a week ago, but it never materialized. Bottom line – it’s unclear if this is actually going to happen seeing how even West’s official website has been less than reliable.

Cruisin for a Bruisin: Highrollers Double-Header this Saturday

Nuns on the Bus Stopping in Charleston