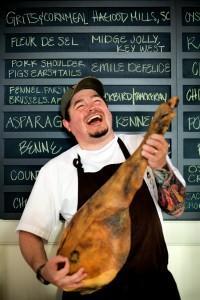 ***UPDATE, 2/7/13*** – Bravo has posted a “Behind the Kitchen Door” video featuring Brock on their website. You can him fish in Alaska with some other members of the cast here.

Chef Sean Brock will be appearing as a guest judge on tomorrow’s (2/5) episode of Top Chef: Seattle. The show airs on Bravo at 10 pm EST.

Brock is no stranger to the spotlight. The McCrady’s and Husk chef has been featured on No Reservations, Charlie Rose, The Layover with Anthony Bourdain, Bizarre Foods, NPR‘s “All Things Considered,” and even the pages of Vogue – amongst others.

Report of Further “Threats” to Your Credit Were Overstated