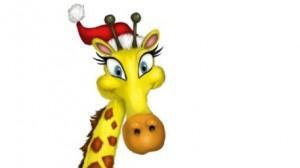 Apparently, giraffes are BIG on Christmas…get it!?

I glanced at my Twitter timeline on Saturday night and saw a few people tweeting something about a giraffe. None of the tweets really explained anything and since I was busy, I brushed by them and went about my business.

Well, it turns out there really was a giraffe in downtown Charleston that evening. The animal was in Marion Square for part of the tree-lighting ceremony. Why? I have absolutely no idea.

Some people expressed concern over the stunt, saying they were frightened when the giraffe arrived. After watching ABC News 4’s video of the event, I can see why. The giraffe bucks and jumps as it’s led by a crowd and it doesn’t appear there was much stopping it from breaking free. I could be wrong about that, but I probably would have been nervous if I was in attendance.

Check out the video HERE and let me know what you think!

Follow us
Related Topics:abc news 4marion square
Up Next