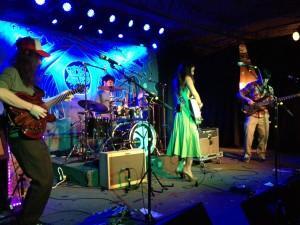 Old You, the Charleston-based quartet, have announced they will be heading into the studio very soon to start recording their debut, full-length album. To those living in the Holy City, this release seems overdue as the group has dominated the music scene’s accolades and headlines. For example, they’ve constantly played the top venues in Chucktown, were named the Charleston City Paper’s Up-and-Coming Artist of the Year in the paper’s 2011 Music Awards, had a weekly gig at the Music Farm this Summer, and released a solid 5-song EP (“So Steady”).

Despite their in-state popularity, Old You will need the community’s help to finish their album. In the coming weeks they will be launching a Kickstarter campaign, which was instrumental in helping local artists Crowfield and Daniel D. complete their latest releases.

I really enjoy the Kickstarter process because it not only helps bands, artists, charities, filmmakers, etc. reach goals they may not normally attain, but also allows those groups to interact with their fan bases by giving away incentives and providing exclusive communication.

Although album details are somewhat scarce, I got a little information from guitarist Caleb Bodtorf before Old You’s set at the Music Awards Winners Showcase last week. He said the release would be produced by MJ Fick, who also produced Dangermuffin’s “Olly Oxen Free.” The selection of Fick bodes well for Old You, as “Olly Oxen Free” was the co-winner of the Charleston City Paper’s 2012 Album Of The Year.

Bodtorf also told me the band was planning on including lots of new material and they can’t wait to get into the studio. Once the Kickstarter campaign goes live, I’ll be posting here so you can all contribute to one of the best bands in Charleston.

Song of the Week: Thanksgiving