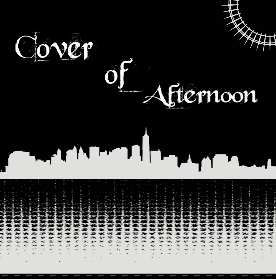 Columbia-based rockers, Cover of Afternoon will be unleashing their long-awaited, debut release in the form of a six-song EP this month. The self-titled effort will be available on November 20th, so everyone in the Holy City will finally understand what all the fuss in the Upstate is about.

Various forms of the band have existed since 2008, but the scope of CoA wasn’t realized until drummer Reid Mewborne joined founding members Allen Bishop and Alex Roberts, that the group really found it’s niche. With the lineup now settled, a growing fan base, plenty of material already in their repertoire, and enough shows under their belt, the group finally hit the studio. The result is a heavy, but balanced EP that should propel CoA into the state’s spotlight and beyond.

The band comes out guns blazing with “Drop Your Weapons” as Mewborne’s quick-hit intro gives way to a powerful jump-in from Bishop and Roberts. The group doesn’t let up on the grit throughout the song with the lyrics matching the music’s intensity. Bishop takes the lead and his voice sounds great, even when some effects are used. The track was the perfect selection to open the EP because it gets the listener pumped up immediately.

When the second track, “Harlot,” begins it’s clear to see CoA has plenty of range. Robert’s starts the song with more melodic singing and shows off his piano-playing chops. The whole group does a great job slowing down their sound before gradually building into an explosion of rock halfway through the tune. Then, before you know it, they’ve settled into a completely different groove to complete the song. “Harlot” is about a broken friendship and the emotions that go along with it – pain, sadness, and anger. The back-and-forth of those feelings are abundantly clear when the initial somber cadence turns into the eventual guttural screaming from Roberts.

CoA continues showcasing their range over the remainder of the EP. The band can seamlessly switch between rock, emo, alternative, punk, laid-back acoustic and screamo sounds, but make no mistake about it, it’s rock at its core. They bring to mind bands like Anberlin or maybe a Jason Gleason-era Further Seems Forever.

The recording next moves to “Not Afraid,” which sounds fairly dark and dreary, but in actuality has some lyrics that express hope even if they are tinged with what sounds like some doubt. I think this a great credit to the band – they make you feel one way, while expressing a completely different emotion. It leaves you somewhat conflicted, just like the songwriters probably were.

The track segues perfectly into “Risk vs. Reward.” It’s almost impossible to tell when one song ends and the other begins. They work really well together. “Risk vs. Reward” seems like it could be an outro to its lead-in because it once again deals with the complexity of emotions before apparently giving way to disgust – “People view kindness as weakness and the strong feed on the weak, When strength is defined as humanity we all lose in the end.” Bishop’s playing towards the end of the song is one of the album’s biggest highlights. Mewborne builds up to Bishop’s great solo which you’ll wish went on longer.

The EP ends on a relaxed note with “MLDB.” The predominately acoustic track isn’t the strongest song of the six, but it once again shows that CoA doesn’t have one defining sound or trait. The band isn’t afraid to experiment.

Almost all of the tracks were recorded at Outlier Studios, which is run by Drew Cyphers of Fusebox Poet. That would explain why, at times, the “vibe” of the album felt like Fusebox Poet’s demo CD I picked up a few years ago. There were some similar production techniques that I could hear throughout.

Despite some minor similarities, CoA definitely stands on their own. Bishop and Roberts can play multiple instruments and Roberts is a talented enough singer to fit into many different styles. Mewborne has some amazing drum fillers throughout and is clearly the piece the group was missing. This six-song sampler will get you excited for the band’s first full-length album, which they are currently working on.

In the meantime be sure to purchase CoA’s self-titled EP when it is released on 11/20/12. There will be CDs available, as well as digital options through iTunes, Amazon, and other sources. CDs can be ordered starting TOMORROW (11/6/12). For more information about Cover of Afternoon be sure to visit their Facebook Page and their ReverbNation page.

You can also check out two of their tracks below..