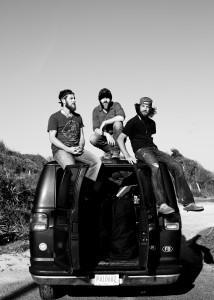 Dangermuffin has often been categorized as a “jam band,” but doing so is a mistake. The trio from Folly Beach cannot be labeled so easily and their new album, “Olly Oxen Free,” proves just that.

Each track could be defined differently – Americana, folk, rock, roots – but why bother? The album is darn good and can be enjoyed by anyone. There are songs that can be enjoyed while digging your toes into the sand on Folly Beach (“Slumber,” “Jaula,” “Loneliest Highway”) or dancing in the comfort of your living room (“Homestead,” “200 Degrees”) and plenty for the in-between moments.

A few local reviews have stated “Olly Oxen Free” (the band’s fourth release) is their best and I won’t argue with those sentiments. Dan Lotti’s vocals are spot-on and meld perfectly into Mike Sivilli’s guitar, Steven Sandifer’s drums and his own banjo-plucking. The album is solid without a weak moment and blends nicely into your daily routine. You could easily notice you’ve had “Olly Oxen Free” on repeat as it becomes your soundtrack to the summer.

This is the type of music you hear while chugging a PBR in a little shack on the beach after a long day in the sun. The perfect ending to a perfect Charleston day. Hopefully, for Dangermuffin, it’ll be much more than that. And it should be. “Olly Oxen Free” isn’t just one type of music that invokes one emotion. It will feel different to each person who gives it a listen.

The music is universal, even if a lazy day by a Holy City beach can be felt throughout the album.

You can purchase the album HERE.

You can read The Charleston City Paper’s review of Olly Oxen Free HERE.

Bacardi Cocktail Classic at the Aquarium