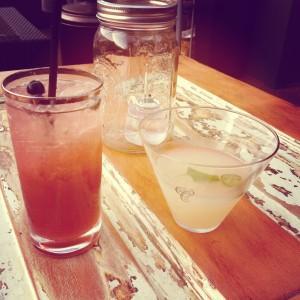 The Holy City is certainly known for its delicious cuisine and there is no shortage of amazing restaurants showcasing it. Although food is at the forefront, cocktails are definitely creeping towards the spotlight.

There are many examples of how boozy Charleston can be:

1. The Firefly Distillery has helped put the city on the map of places that are serious about their libations.

3. There are multiple Beer Festivals each year

4. Restaurants like Husk are putting a premium on good bourbons

5. There are numerous wine bars (most notably: Social).

6. And now the cocktail is taking center stage. The Gin Joint on East Bay Street and The Cocktail Club on King Street are leading the revolution. In fact, the Gin Joint was just featured on “Drinking Made Easy.” However, there are plenty who believe the Cocktail Club should have been the highlight of the show. After visiting the bar it’s hard to argue that point.

The Cocktail Club is a fairly new establishment that focuses on modernized versions of Prohibition Era drinks. There is also some light fare available, but the booze is clearly the star. The venue definitely has a secret club vibe to it, which was evident when we tried to locate it. The bar is slightly difficult to find as it shares an address with the Macintosh and has almost no signage. After some wandering, we noticed a glass door featuring a cursive, double-C logo to the left of the Macintosh. Immediately inside the door was a staircase leading up to a dim bar.

The inside of the Cocktail Club was impressive. It had a nice blend of classic Charleston with some modern decor. Besides the standard bar, there were somewhat private rooms with leather couches, comfy chairs, and coffee tables. There was plenty of space in each section which gave each a comfortable and relaxed environment. There was also a patio with heat lamps for those who preferred the fresh air.

The staff was friendly and our bartender was very knowledgeable. We found out the drink menu has some old stand-bys, but has changes with each season. It’s got to be hard for the staff to keep up, but the bartender definitely knew his stuff. He gave us some recommendations and we were on our way.

Ms. Holy City Sinner went with a fruit-heavy cocktail called The Eternal Sunshine. The drink had a couple full blueberries floating in it and acai and pomegranate flavors. It may have been the perfect “girl-drink,” but it definitely could get you tipsy. This would be a good choice for those who don’t like their drinks to taste too much like alcohol. Her second drink (My New Favorite Spring Cocktail) was similarly refreshing.

I decided to be a little more adventurous and went with The Double Standard, which featured serrano-infused gin, cucumber vodka blended with cucumber, water, ginger syrup, celery bitters, cilantro and a slice of serrano pepper. The drink was really tasty and not too spicy, but the serrano certainly gave it a little kick. Adding a spicy taste to a drink can be a dangerous undertaking, but the Cocktail Club definitely succeeded. I highly recommend this drink.

The Walking Dead was my second choice. This drink mixed Appleton spiced rum with Luxardo Maraschino liqueur and guava juice. Although I preferred my first drink, this one went down easy and would be a perfect Summer drink. There were so many other drinks I wanted to try, but I’ll have to save those for my next trip.

There were also plenty of beers available, non-alcoholic drinks, seasonal punch bowls, wine and more. The Club also has cocktail classes and beer tastings. After only one visit it is easily one of my favorite Charleston haunts. The house-made infusions, fresh ingredients, and daring combinations make The Cocktail Club a place of worship in the Holy City.

You can view a menu sampling HERE.

Follow us
Related Topics:downtownplaces of worshipthe cocktail club
Up Next