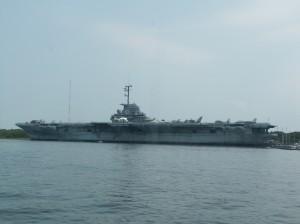 It appears the rumors have a lot of truth to them. Reports began emerging early on Wednesday that Charleston would be the home of the NCAA’s second Carrier Classic. The Post and Courier is now reporting (HERE) that it is all but a done deal. The Carrier Classic made its debut late last year near San Diego with the game being played on the aircraft carrier Carl Vinson. The Holy City’s edition of the Classic would take place on the USS Yorktown on November 9th, 2012. There would be both a men’s game and women’s game on the deck of the ship that day.

The men’s matchup will feature the University of Connecticut who are the reigning National Champions going into this year’s NCAA Tournament and a yet-to-be-determined opponent. The women’s game will pit the University of Notre Dame against Ohio State University.

Details are still being figured out, but it appears the Carrier Classic is coming to Charleston!

Want to be on TV?