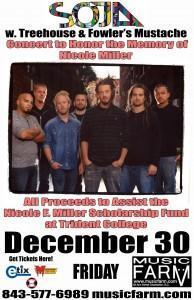 The Music Farm will be hosting a charity concert featuring SOJA on December 3oth, 2011. The concert will honor the memory of Nicole Miller who died in an accident at the All Good Festival in West Virginia this past summer. Miller, a Mt. Pleasant native, was only 20 years old at the time of the tragedy. Miller was a frequent concert-goer and SOJA was her favorite band. When informed of Miller, the group was generous enough to assist with this concert and donate some of the proceeds to the Nicole F. Miller Memorial Scholarship. Besides being good samaritans, SOJA is a good band. I saw SOJA for the first time in July and they were awesome. I definitely recommend going to the show, especially since it’s for a great cause.

The day won’t just be special because of the memorial concert; December 30 was designated Nicole F. Miller Day by a proclamation passed at a Mount Pleasant town council meeting earlier this year.

Tickets for the event can be purchased HERE. Also performing are Fowler’s Mustache and TreeHouse. Can’t make it? You can still donate to the scholarship fund HERE.