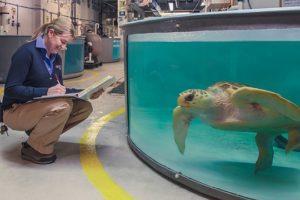 The South Carolina Aquarium has been working alongside National Aquarium and New England Aquarium to address the current lack of federal financial support for organizations providing sea turtle response and rehabilitation.

The Aquarium, among other likeminded institutions, directly contributes to sea turtle conservation efforts to ensure sea turtles have a future in our oceans. Sick and injured sea turtles arrive at the South Carolina Aquarium Sea Turtle Care Center™ suffering from a variety of ailments, including debilitated turtle syndrome, predation and boat strike wounds, injuries from accidental interactions with fishing gear and even exposure to dangerously low temperatures, the frequency of which is intensifying due to climate change.

As a result, the number of sea turtle strandings and the costs associated with rehabilitation are increasing. There is no existing grant program that provides direct support to the dozens of institutions who rescue and rehabilitate critically endangered sea turtles.

“The South Carolina Aquarium has been dedicated to rehabilitating sick and injured sea turtles for over 20 years. Sea turtles are ambassadors for conservation and drive awareness and actionable change for a better tomorrow,” says South Carolina Aquarium President and CEO Kevin Mills. “Their stories are critical to connecting people to water, wildlife and wild places, and we are grateful to work alongside National Aquarium and New England Aquarium in the movement to secure federal financial assistance to continue this meaningful work.”

Thanks to the nationwide sea turtle funding effort led by the National Aquarium, New England Aquarium and South Carolina Aquarium, three dozen bipartisan members of Congress and 42 institutions from 22 states and territories have already endorsed calls for funding sea turtle stranding response and rehabilitation. The Sea Turtle Rescue Assistance Act builds on that momentum by creating a permanent grant program to support organizations responding to and caring for threatened and endangered sea turtles.