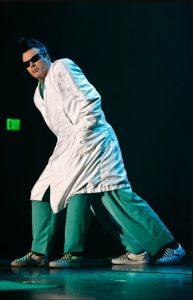 
Rudy Cody is known for his FOX TV specials Rudy Coby: The Coolest Magician on Earth and Rudy Coby: Ridiculously Dangerous hosted by Dick Clark and featuring numerous celebrities ranging from The Muppets to Little Richard. He also appeared on America’s Got Talent.

AnnaRose (below right) was recently nominated for the “Best of Las Vegas Awards” within multiple categories for her 2019 summer residency at the Paris Hotel & Casino. AnnaRose is the first and only woman hypnotist to headline a hypnosis show on the world-famous Las Vegas strip.

Here’s a look at their schedule:

Tickets are on sale now at www.HolyCityMagic.com.