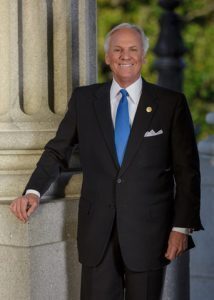 Governor Henry McMaster (right) today announced that he has moved to have the entire Fourth Circuit Court of Appeals review a federal district court’s preliminary injunction of the so-called South Carolina Fetal Heartbeat and Protection from Abortion Act (Fetal Heartbeat Act). A panel of three judges upheld the district court’s decision in February of this year. Now, the governor, joined by other defendants, is asking the entire Fourth Circuit to consider the appeal.

“We’ve said we will take this case all the way to the United States Supreme Court, and that’s exactly what we’re going to do if we have to,” said Gov. Henry McMaster. “There is no right more precious and more fragile than the right to life, and we will do everything in our power to protect it.”

The Fetal Heartbeat Act, which Governor McMaster signed into law on February 18, 2021, requires doctors to perform ultrasounds to check for a so-called “fetal heartbeat,” which can typically be detected about six weeks into pregnancy. If cardiac activity is detected, the abortion can only be performed if the pregnancy was caused by rape or incest, or if the mother’s life is in danger.

Opponents have argued that many women do not know they are pregnant at six weeks, and with such an early deadline, the law gives women little time to consider whether to have an abortion.

According to ABC News, medical experts say “the cardiac activity is not an actual heartbeat but rather an initial flutter of electric movement within cells in an embryo. They say the heart doesn’t begin to form until the fetus is at least nine weeks old, and they decry efforts to promote abortion bans by relying on medical inaccuracies.”

This law does not punish a pregnant woman for getting an “illegal abortion,” but the person who performs the procedure can be charged with a felony, sentenced up to two years, and fined $10,000 if found guilty.