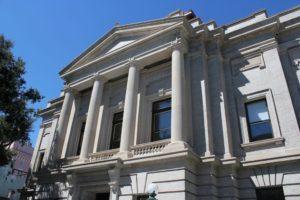 Today, the Gibbes Museum of Art announced its schedule of special exhibitions coming to the museum in 2022. From historical paintings to Greek geometric art, this lineup of exhibitions features various mediums exploring a vast array of topics, encouraging visitors to engage and learn about new art forms and genres.

“We are excited to announce these distinguished artists and exhibitions on display at the Gibbes this year,” says Angela Mack, executive director of the Gibbes Museum of Art. “The Gibbes aims to introduce new art forms, promote creativity and connect the community with art in new and exciting ways, and these special exhibitions allow the museum to do just that.”

See the list below of special exhibitions coming to the Gibbes in 2022.

William H. Johnson painted his Fighters for Freedom series in the mid-1940s as a tribute to African American activists, scientists, teachers, performers and international heads of state working to bring peace to the world. He celebrated their accomplishments even as he acknowledged the realities of racism, violence and oppression they faced and overcame. Some of his fighters—Harriet Tubman, George Washington Carver, Marian Anderson and Mahatma Gandhi—are familiar historical figures; others are less well-known individuals whose determination and sacrifice have been eclipsed over time. Drawn entirely from the collection of more than 1,000 works by Johnson given to the Smithsonian American Art Museum by the Harmon Foundation in 1967, this exhibition is the first-ever presentation of this series in Johnson’s home state of South Carolina. Fighters for Freedom: William H. Johnson Picturing Justice is organized by the Smithsonian American Art Museum with generous support from Art Bridges, Faye and Robert Davidson, and the Jacob and Gwendolyn Lawrence Foundation.

A New Deal: Artists at Work

During the Great Depression of the 1930s, President Franklin Delano Roosevelt launched his ambitious Works Progress Administration (WPA) programs that sent millions of unemployed Americans back to work, including more than 5,000 artists. The Federal Art Project, formed under the WPA, afforded opportunities to a diverse group of artists, including women, African Americans and recent immigrants from China, Russia and Germany. This monumental effort to put artists back to work resulted in a collection of artworks intended to uplift the national spirit and encourage creativity in the face of great challenges. The Gibbes is one of a select group of institutions across the country that houses a historic collection of Federal Art Project prints.

William Eggleston Photographs from the Laura and Jay Crouse Collection

It is said that William Eggleston’s unique ability to conflate the epic and the everyday has made him one of the most impactful figures in late 20th century photography. A native of Memphis, Tennessee, Eggleston first photographed his local environs in the 1950s in black-and-white but became one of the first fine art photographers to use color to record his observations in a more heightened and accurate way. Today, his strikingly vivid yet enigmatic images of parked cars, billboards, storefronts, diners and other artifacts of the ordinary world are considered groundbreaking. The photographs presented in this edition of the museum’s Charleston Collects exhibition series were selected from the Laura and Jay Crouse Collection and represent many of the pioneering artist’s most notable works. The exhibition will be accompanied by a full-color catalog with an essay on the artist by Simon Constantine, Ph.D., professor of photographic history at Birkbeck, University of London, and Sotheby’s Art Institute.

Acclaimed for his large-scale paintings that explore modern American life and cultural heritage, contemporary artist Bo Bartlett follows the traditions of American Realists such as Andrew Wyeth, Thomas Eakins and Edward Hopper. Earthly Matters presents a selection of Bartlett’s recent works that examine humankind’s impact on and interaction with nature’s elements. Bartlett’s subjects, both human and animal, find themselves in precarious environmental situations, either from their own doing or by forces beyond their control. Bartlett’s appreciation for the beauty of ordinary moments imbues his work with an underlying luminosity and frankness. His larger-than-life scenes invite viewers to contemplate their role in the narrative.

This is the first major museum exhibition in the United States to focus on Greek art during the Geometric period (c. 900–700 B.C.) in more than 25 years. It is the first exhibition of its kind to focus on the aesthetics of Greek Geometric art and to demonstrate that stylistic principles in visual art during the Geometric period reflect a characteristically Greek idea of “the beautiful” (kallos). A new visual vocabulary developed during this period – one that stressed clarity, balance and symmetry. These design principles may appear contemporary, yet they provided the foundation for all subsequent Greek art. The collection presents new evidence that re-examines the contributions and innovations of Geometric art and its enduring legacy throughout classical antiquity. The show features 57 objects drawn from The Sol Rabin Collection, considered the most important Geometric Greek collection in private hands. This exhibition is organized by the Museum of Fine Arts, St. Petersburg.

For more information about these and other works on display at the Gibbes Museum of Art, visit www.gibbesmuseum.org.