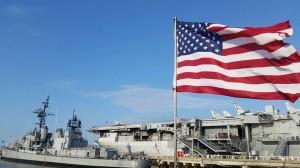 Patriots Point Naval & Maritime Museum will host a free Pearl Harbor Day Memorial Service aboard the USS Yorktown on Tuesday, December 7th at 11 am to honor the 25 known South Carolinians who were killed during the 1941 Japanese attack.

The service, organized with Veterans of Foreign Wars (VFW) Post 10624, will include a wreath-laying, tolling of a bell, and a traditional gun salute.  Museum admission will be waived from 10 am to 11 am for the memorial service. The service will also livestream on Patriots Point Facebook and YouTube channels.

The Japanese used more than 350 aircraft during the hour-and-15-minute attack on Pearl Harbor on December 7, 1941.  2,403 people were killed in the attack, which includes 2,335 U.S. service members and 68 civilians. In total, more than 300 U.S. aircraft and 19 Navy ships were destroyed or damaged.

In addition to the memorial service, Patriots Point will host the Life and Legacy blood drive in partnership with the Blood Connection. From 9 am to 2 pm, visitors can honor the legacy of the fallen by donating blood that will save lives at Charleston-area hospitals. All blood donors will receive free parking in the museum lot. Plus, a $20 charitable donation will be made to the USS Yorktown Foundation for every person who donates blood at Patriots Point. This contribution will support the preservation and restoration of museum exhibits.

For more information and to make an appointment to donate blood, visit patriotspoint.org.