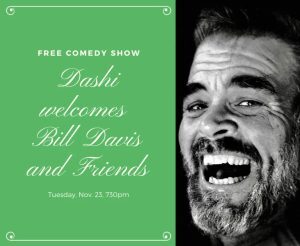 On Tuesday, November 23rd at 7:30 pm, Dashi will welcome Bill Davis & Friends to the patio for a free comedy show.

Davis is a Charleston-based comedian who has opened shows for stars like Amy Schumer, Emo Phillips, Todd Barry, and Jon Reep. He’s performed comedy at Second City in Detroit, as well as clubs in Chicago, Chapel Hill, Charlotte, Savannah, Myrtle Beach, and more. Additionally, Bill has performed at comedy festivals throughout the Southeast and was a finalist for ‘Best Local Comic’ for the Charleston City Paper.