Three first period goals provided enough of a cushion for the South Carolina Stingrays (5-2-0-0) to hold on to a 4-2 victory over the Orlando Solar Bears (4-4-1-0). Cedrick Andrée turned back 36 shots to earn his first professional victory on Saturday night at the North Charleston Coliseum.

Justin Florek cleaned up in front of the net, tallying his third goal of the season on the man advantage only 4:31 into the opening frame with help from Andrew Cherniwchan and Jordan Subban. Subban added one of his own less than a minute and a half later as he made a bee line for the backdoor feed from Jade Miller with help from Florek. 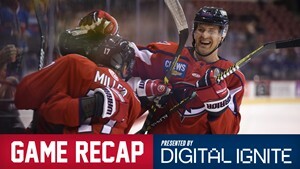 Florek netted his second of the first period, scoring the same way he did on the first, slamming home a rebound for the 3-0 lead. The rebound came after Orlando goaltender Stefanos Lekkas made a save on Patrick Holway’s initial shot. Miller picked up his second assist of the evening as well on the goal.

Tyler Bird provided all the scoring for Orlando in the second period, picking up two goals less than three minutes apart and cutting the deficit back to one. Aaron Luchuk picked up his league-leading 16th point of the season on Bird’s second goal of the night.

Connor Moore iced the game with 1:03 remaining in regulation by scoring his first professional goal with a 150-foot goal.

Andrée (1-0-0-0) made 36 saves for his first professional victory in his first ECHL start. Lekkas stopped 27 Stingrays shots while picking up the loss for Orlando.

The Stingrays continue their 2021-22 campaign tomorrow afternoon at the North Charleston Coliseum against the Orlando Solar Bears for Sunday Funday presented by Crews Subaru and Charleston Parks and Recreation at 3:05pm.

Single game tickets for all your Stingrays home games for the upcoming 2021-22 home season are on sale now via Ticketmaster.

Season ticket plans are on sale now! For more information or to purchase, contact the Stingrays by phone at 843-744-2248 or submit this form.

Six Orlando Goals Too Much in Stingrays Loss