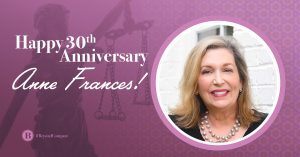 Press Release
Whether it be through donating time to community work, serving as a board member for various organizations, or using her knowledge and skills in the court to fight for those who need it most, Anne Frances Bleecker has spent her years in law working to create a better life for those around her.

Today, we are honored to celebrate our fearless leader’s 30th anniversary of being admitted to the Bar!

Before beginning her life in law, Anne Frances started in Washington, D.C., where she worked with our government to help the nation as a whole, serving for years as a Congressional Press Secretary and Telecommunications Lobbyist before making her journey homeward to South Carolina.

Anne Frances began her legal career in the halls of the University of South Carolina Law School. She showed a passion for progress and dedication to her practice during her academic years that would help to build a foundation for the future. During her attendance, Anne Frances served as the Student Works Editor of the Law Review, sat on as a member of the American Bar Association Moot Court team, and was bestowed with the South Carolina Bar Foundation’s I.M. Goldberg Scholarship. Her dedication to the field of law did not go unnoticed by the South Carolina Law School, which honored Anne Frances in 2000 with The Compleat Lawyer Award.

A Charlestonian by birth, Anne Frances has worked tirelessly towards improving her home and all of its citizens’ lives. During her time practicing South Carolina law, she has served on the Charleston City Council (2000-2008) and acted as Chair of the Human Resources Committee. She has empowered Charleston’s elderly by creating the Mayor’s Office on Aging, was a member of the Executive Board of the International African American Museum (2000-2016), and much more.

Aside from running her own practicing family law firm at Bleecker Family Law, Anne Frances is using her free time actively assisting those in her community. She currently serves as Vice-Chair of the Board of Our Lady of Mercy Community Outreach. She also sits as a Member of the Charleston County Pro Bono Legal Services board, the South Carolina Bar Solace Committee, and the South Carolina Bar Fee Dispute Committee.

If there is one thing we have learned from Anne Frances and as part of the Bleecker Family Law team, it is that as long as there is good to be done, you can always find the energy and capacity to get it done.

Congratulations, Anne Frances, on an incredible 30 years! You are a force for good to be reckoned with, and we are so proud to be part of this legacy for change.

Want to learn a little more about Bleecker Family Law and Anne Frances? Check out her Charleston Inside Out Boss Babes feature with Explore My Town Charleston!