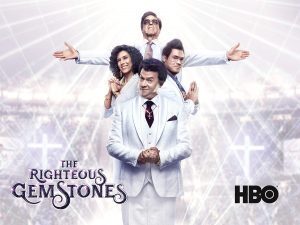 HBO today released an official teaser video for the second season of The Righteous Gemstones, a comedy series that was predominately filmed in the Charleston area and stars Danny McBride, John Goodman, Edi Patterson, and Adam Devine. The second season premieres on January 9th, 2022.


The half-hour show tells the story of a world-famous televangelist family with a long tradition of deviance, greed, and charitable work. According to HBO, season two finds the Gemstone family “threatened by outsiders from both the past and present who wish to destroy their empire.‌”

In addition to starring in the show, McBride also created, wrote, and directed the program. He also executive produced the series alongside Jody Hill and David Gordon Green. Earlier this week, Green announced that the show had already been renewed for a third season.


The vast majority of filming for The Righteous Gemstones took place in the Charleston area and numerous locals were cast as extras, so local viewers are likely to see plenty of familiar places and faces.

You can watch the teaser below:

Association for the Blind and Visually Impaired SC Receives $5,000 Grant from Dominion Energy