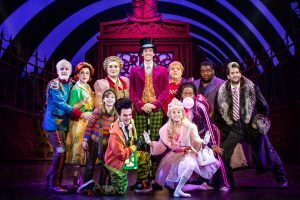 The Best of Broadway today announced that tickets to Roald Dahl’s Charlie and the Chocolate Factory will go on sale Monday, November 8th at 10 am. Tickets will be available online at Ticketmaster.com and the North Charleston Coliseum Advance Ticket Office. The production will play at the North Charleston Performing Arts Center from April 22nd to 24th, 2022.

Roald Dahl’s Charlie and the Chocolate Factory tells the story of Willy Wonka, world famous inventor of the Everlasting Gobstopper, who has just made an astonishing announcement. His marvelous—and mysterious—factory is opening its gates…to a lucky few. That includes young Charlie Bucket, whose life definitely needs sweetening. He and four other golden ticket winners will embark on a mesmerizing, life-changing journey through Wonka’s world of pure imagination. Get ready for Oompa-Loompas, incredible inventions, the great glass elevator, and more, more, more at this everlasting showstopper!

Leading the cast as the extraordinary chocolate maker, Willy Wonka, is Cody Garcia, with Jackson Greenspan, William Goldsman, and Coleman Simmons alternating in the title role of Charlie Bucket.

The hit Broadway musical features songs from the original film, including “Pure Imagination,” “The Candy Man,” and “I’ve Got a Golden Ticket,” alongside a toe-tapping and ear-tickling new score from the songwriters from Hairspray.

Follow us
Related Topics:best of broadwaynorth charleston performing arts centerRoald Dahl’s Charlie and the Chocolate Factory
Up Next

On Saturday, December 4th, from noon to 5 pm, the Firefly Distillery and the &Lobster Food Truck will be hosting...