The Bachelor Live On Stage Official Tour will arrive at the North Charleston Performing Arts Center on Saturday, April 8th, 2022. As the ultimate Bachelor Nation fan party, the show is a fun, flirtatious, and interactive evening hosted by former Bachelorette Becca Kufrin, who is also host of the Bachelor Happy Hour podcast and was most recently seen in the newest season of Bachelor in Paradise.

Tickets are available at ticketmaster.com. Tickets go on sale Friday, October 29th at 10 am via Ticketmaster.com or at the Coliseum Advance Ticket Office. Hours are Mondays, Wednesdays & Fridays from 10 am to 4 pm.

This time around, the tour will feature men from recent seasons of The Bachelorette and Bachelor in Paradise as the on-stage Bachelor – cast members will be announced at a later date. Once again, the live show fits an entire season of The Bachelor drama into one evening, as the audience and on-stage participants will leave the theater feeling like they just spent an evening at the mansion. It includes lively games and lighthearted connections with a handful of local woman, hand-picked from the audience to experience first-hand what life at the mansion is really like. From glamorous limo entrances to outrageous group dates and all the memories that come along with it, Bachelor Nation fans dressed to the nines can bring their watch party crew to cheer on those vying for the final rose of the evening.

And, for the first time ever, Bachelor Nation will have a say! Audience members will help along the journey by asking questions, making suggestions, and cheering on the participants on stage. From the first impression rose to group date challenges and the coveted one-on-ones, the production gives fans the chance to watch live from their seats as the journey unfolds on stage.

“I hope the audience will feel that unique energy, positivity, hope and connection (fingers crossed) that I felt when I joined Bachelor Nation,” said host Becca Kufrin. “I can’t wait to get back out on the road again.”

The tour is the latest extension of the hit franchise, which already includes The Bachelor, The Bachelorette, and Bachelor in Paradise, all produced by Warner Bros. Unscripted Television. The Bachelor television series is entering its 20th year on ABC and airs in over 100 countries around the world.

The Bachelor Live On Stage will follow all local and state health department guidelines for COVID-19 to ensure a healthy and safe environment for everyone. 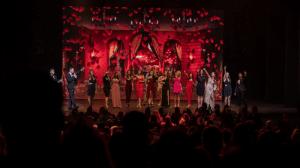