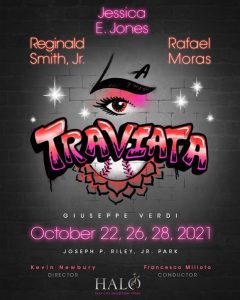 La Traviata stars Jessica E. Jones as the ill-fated courtesan Violetta, Rafael Moras as her ambitious lover Alfredo, and Reginald Smith, Jr. as Germont, the meddling father who values his family’s reputation over the happiness of his son.

Led by Grammy-Award winning director Kevin Newbury, the artistic team will transform the ballpark into an intimate theatrical setting where modernity and tradition collide amidst a pandemic. Conducted by HALO’s Music Director Francesco Milioto, this production is sure to resonate with present day viewers.

Follow us
Related Topics:Holy City Arts & Lyric Opera
Up Next