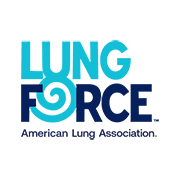 Charleston resident Anna Holloway is a healthy woman with two young children, so a lung cancer diagnosis earlier this year was a huge surprise. Later this month, she is participating in the American Lung Association in South Carolina’s LUNG FORCE Run/Walk at Folly Beach to raise awareness that anyone can get lung cancer.

Last year, Holloway began experiencing abdominal pain that wouldn’t go away. Doctors assumed it was either muscular or a gastrointestinal concern. None of the initial tests showed anything wrong, so they did a CT scan, which revealed a spot on her lung. She went to see a pulmonologist, but since Holloway is young, healthy and had no risk factors for lung cancer, they said it was likely nothing to worry about. After a biopsy, she got the news. It was stage I lung cancer.

“I will never forget the phone call,” she said. “It was a strange feeling because I didn’t know what was going to happen. I have known people with cancer, but not in my close circle. I was grateful that he called on a Friday morning and I was able to meet with the surgeon that same day.”

Holloway had her tumor tested for genetic markers to help determine the best treatment. She first had surgery to remove the bottom right lobe. Then she had four rounds of chemotherapy, which she finished in July. Now she is cancer-free and gets scans every three months.

During treatment, she met a nurse at Roper Hospital who told her about the LUNG FORCE Run/Walk. She decided to sign up, so on October 30 she will participate to raise awareness about lung cancer.

“My family has no history of lung cancer or anything, so it was a surprise. I never would have guessed I would have lung cancer. I had never met anyone who had lung cancer,” said Holloway. “The number one thing is to listen to your body and be an advocate for yourself.”

The LUNG FORCE Run/Walk is at 9 am on October 30th at Folly Beach. For more information and to register, visit LUNGFORCE.org/Charleston.