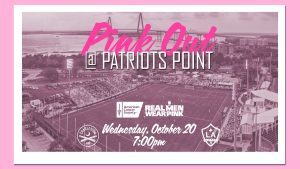 The Charleston Battery announced Wednesday a partnership with the American Cancer Society to support breast cancer awareness through the Real Men Wear Pink campaign. During the month of October, the club will raise awareness and money for the American Cancer Society’s breast cancer initiatives, including research, services and education around screenings and risk reduction, leading up to a “Pink Out” at Patriots Point for the October 20 match against LA Galaxy II.

“This year alone, nearly 300,000 women will be diagnosed with breast cancer,” said Battery executive chairman Rob Salvatore. “It affects families everywhere and we’re in a unique position to leverage the entire Battery organization to raise awareness and support behind such an important cause.”

The club will raise money through online donations to Real Men Wear Pink of Charleston with Salvatore serving as one of the Charleston area’s ambassadors for Real Men Wear Pink. In addition, limited-edition “Charleston Wears Pink” Battery t-shirts will be available for fans to purchase with a portion of the proceeds supporting Real Men Wear Pink. The campaign will culminate with a “Pink Out” at Patriots Point on October 20th, where fans will be encouraged to wear pink to the stadium in support of breast cancer awareness. The Battery will also wear pink jerseys for the October 20th match against LA Galaxy II, which will then be autographed and auctioned off in support of the campaign. Every dollar raised through the various initiatives will help the American Cancer Society save lives from breast cancer through early detection and prevention, research and patient support.

Fans can get involved immediately by donating to the Battery’s Real Men Wear Pink campaign at www.charlestonbattery.com/pink. Supporting merchandise will be unveiled leading up to the match, including the exclusive pink player jerseys that will be available for auction. Tickets are still available for the October 20th “Pink Out” at Patriots Point against LA Galaxy II via SeatGeek.com, the Battery’s digital ticketing provider.