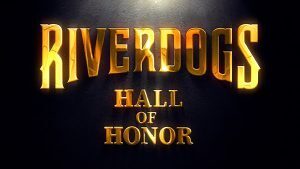 The Charleston RiverDogs and Boeing will host their final Hall of Honor induction ceremony of 2021 prior to Friday night’s Boeing Military Appreciation Night at The Joe. The ceremony will recognize Master Sergeant Tom Crawford of the United States Air Force and Major Angie Powers of the United States Army Reserve in its fourth class of inductees.

The Hall of Honor is the most recent addition to Boeing and the RiverDogs joint military appreciation platform, which aims to honor and celebrate military families in the Lowcountry through various recognition programs. The team inducted two classes of two inductees each during 2020 and one class of two inductees this May.

At each Boeing Military Appreciation Night a minimum of two inductees will be enshrined into the Hall of Honor. A community military committee chooses the inductees from a long list of nominees, including many who are nominated through the Hall of Honor’s public nomination link.

All inductees will be recognized on the field on a Military Appreciation Night, and will have their story told on the RiverDogs’  Hall of Honor web site.

The ceremony will take place on the field at The Joe at 6:30 p.m. on Friday, August 20 prior to that night’s 7:05 first pitch against the Columbia Fireflies. Media members are invited to attend.

About the Inductees
Master Sergeant Crawford served honorably for 33 years on active duty and the Air Force Reserve.  Commencing April-to-November 1973, while in support of the Vietnam War, Crawford served in Korat, Thailand. In 1990-91, Crawford was activated and served both in Desert Shield and Desert Storm in Daharan Air Base, Saudi Arabia with the 38th Aerial Port Squadron. In April 2002, Crawford was asked to be the NCOIC of the 315th Public Affairs office at Charleston Air Force Base. He retired from the Air Force Reserve in June 2008.

He continues to actively serve his country and community by promoting and supporting veterans’ interests and performing over 40 non-profit fundraising galas each year as a Benefit Auctioneer Specialist, raising upwards of $10 million annually. He is known throughout the Lowcountry as the host of Lowcountry Live on WCIV Channel 4 daily at 10:00 a.m.

Major Powers, the first female inductee to the Hall of Honor, has served for over 28 years in the Army Reserve and is currently a Nurse Practitioner in the 7224th Medical Support Unit, Joint Base Charleston. She has multiple deployments that include an Urban Augmentation Medical Task Force supporting hospitals treating COVID-19 patients, a combat deployment in Iraq in support of Operational Iraqi Freedom, and a Humanitarian deployment to El Salvador in support of Task Force New Hope.

She has received multiple awards, decorations and was recently inducted into the prestigious Order of Saint Maurice from the President of the National Infantry Association and the Chief of Infantry for her individual contributions to the Infantry during her combat deployment.

In her civilian career, Powers is full-time lead faculty at MUSC in the Doctor of Nursing practice program and Clinical Director of a Mental Health Nurse Practitioner Residency.