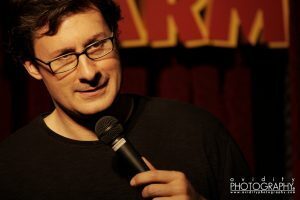 Keith “Big Daddy” Dee is set to host another weekend of standup comedy with the biggest name in comedy (20 characters), Costaki Economopoulos.

Over the years, Costaki has performed in all 50 states and you may have recently seen him on a Showtime, Last Comic Standing, NickMom Night Out, or more.  Also a talented writer, Costaki’s jokes have appeared on The Tonight Show, The Late Late Show, and Best Damn Sports Show Period.

However, the comedian is probably best known for his regular segment on the syndicated Bob & Tom Radio Show that reaches some five million people in 140 markets. That segment has spun off into “Quick Snaps,” the all-NFL topical version, which has a weekly home during the season on Sirius XM Satellite Radio. “Quick Snaps” is also a podcast, and appears weekly on several independent radio shows all over the country.