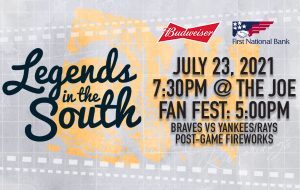 On Wednesday, the Charleston RiverDogs announced the date and rosters for an annual staple in the Holy City, the Legends in the South game presented by Budweiser and First National Bank. The contest will be held at The Joe on Friday, July 23rd.

This year’s game will feature Toby Hall, Seth McClung, Elliot Johnson, Tony Saunders, and Dan Wheeler who each suited up for the RiverDogs in their first stint as a Tampa Bay Rays affiliate from 1997-2004.

In this year’s event, a team comprised of Braves legends will face off in a softball game against a team of Yankees/Rays legends. Gates will open at 5 pm for a pre-game fan fest featuring player autographs. The RiverDogs and MUSC will host an online auction leading up to the event featuring memorabilia and the chance to appear in the game. There will also be an auction in the ballpark on the night of the event for unique in-game experiences, including the opportunity to serve as a bat boy. The first pitch of the game is slated for 7:30 pm.

For the first time, the Legends experience will be capped off with post-game fireworks, presented by First National Bank.  All tickets are $10 and seating is general admission. A portion of the night’s proceeds will benefit MUSC Shawn Jenkins Children’s Hospital.

As the year has progressed, more and more has returned to normal at Joseph P. Riley, Jr. Park. The Charleston RiverDogs have moved into the heart of their schedule and the ballpark recently hosted its first concert since the outset of the pandemic.

“It has been rewarding to see our schedule play out and to have hosted more than 20 RiverDogs games at The Joe this season,” said RiverDogs President and General Manager Dave Echols. “That being said, it’s a great feeling to host these marquee events at the ballpark when the team is on the road.”

Mark Wohlers, a 1996 MLB All-Star, headlines the new additions to the Atlanta alumni roster as he joins past participants Ryan Klesko, Greg McMichael, Mike Bielecki, Chris Hammond, Pete Smith, Jeff Ridgway, and Brian Jordan. Joining Wohlers as a first-year participant in the game is fellow pitcher Peter Moylan. The right-hander pitched in 499 career Major League games over 12 season, including 9 with Atlanta.  He posted a 3.10 earned run average over his career which ended following the 2018 season.  The native of Australia was recently named the manager of the Australian Baseball League’s Melbourne Aces.

Wohlers, like Moylan, also pitched in the big leagues for 12 seasons including 9 with the Braves. The native of Holyoke, Massachusetts served as the Braves closer during the 1995 run to a World Series title, collecting 25 saves that season. He came back in 1996 and earned a selection to the All-Star Game by posting a 3.03 ERA with a career-high 39 saves and 100 strikeouts in 77.1 innings. In his rookie season, Wohlers pitched 2.0 innings in a combined no-hitter tossed by three Braves pitchers on September 11, 1991 against the San Diego Padres.

A native of Westminster, California, Klesko’s Major League career spanned 16 seasons with the Padres and Giants along with Atlanta. The lefty slugger finished third in the Rookie of the Year voting in 1994 and was named an All-Star in 2001 with the Padres. Klesko made history with the Braves in 1995 when he became the first player in history to hit a home run in three consecutive World Series games. Over his career, he hit .279 with 278 home runs and 1,564 total hits. His .525 career slugging percentage with Atlanta still ranks fifth all-time in Braves history.

The Yankees/Rays Legends will once again be led by Legends in the South staples Ron Blomberg, the first designated hitter in baseball history and pitchers Ramiro Mendoza and Brian Boehringer. Blomberg made his MLB debut with the Yankees in 1969 and was a career .293 hitter in eight seasons at the sport’s highest level with 52 home runs. Mendoza, nicknamed “El Brujo,” was part of five World Series winning teams in a ten-year career.  The right-hander from Panama collected 59 wins and tossed nearly 800.0 innings over the course of his time in MLB with the Yankees and Red Sox. Boehringer pitched in a total of 356 games for four different Major League teams over 10 years.

New additions to the game include former Rays standouts Grant Balfour and Hall. Balfour, a relief pitcher, is the all-time saves and strikeouts leader among Australian pitchers to appear in MLB.  He also holds an Oakland A’s record with 44 consecutive saves.  In 2008, Balfour was a large part of the Rays first ever division title and American League Pennant. He posted a 1.54 ERA and struck out 82 batters in 58.1 innings. Hall’s name is scattered throughout the Rays record book following his seven years with the club.  He ranks eighth in doubles (112), ninth in games played (586) and tenth in RBI (251), hits (538) and at bats (2,050).

Also joining the event to represent the RiverDogs new affiliation with the Rays are Wheeler, Saunders, McClung and Johnson.  That trio provides a combined 26 years of MLB experience to the team.

Tickets are now available online and can be purchased here.