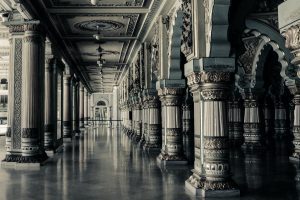 A city of great historic and cultural significance, Charleston is home to more than 2,800 well-preserved historic buildings. Founded in 1670, Charleston is the oldest city in South Carolina, which is exemplified by it’s variety of architectural styles representing different time periods. From homes to churches and commercial buildings, Charleston’s charming historic buildings showcase the city’s vibrant and fascinating history.
Heyward-Washington House
Built in 1772, Heyward-Washington house is a fine example of Georgian architecture. In classic Georgian style, this building features symmetrical, geometric façades, several front-facing windows, and a large front door decorated with elaborate crown molding. The finished look is both elegant and boxy at the same time. In the past, the Heyward-Washington house was lived in by Thomas Heyward, a signatory of the Declaration of Independence, as well as rented out to George Washington temporarily in 1791 — earning the house it’s name. In 1930, it was opened up to the public as a historic house museum complete with a collection of historic Charleston-made furniture and formal gardens featuring 18th-century foliage.
The Huguenot Church
Built in 1844 in the French Quarter, the Huguenot Church is a Gothic Revival-style church featuring all the hallmarks of the Gothic Revival (or Neo-Gothic) tradition. This includes architectural features inspired by medieval Gothic architecture. Think: scalloping, finials, hood mouldings with ornamental label stops, pointed windows, and pinnacles reminiscent of castles. In fact, the Huguenot Church is the oldest Gothic Revival church in all of South Carolina. It’s history documents the successful integration of French refugees back in the 1680s when the congregation first started. 18th-century, French-style church services are still held at the church today, although in English.
Preserving Charleston’s historic buildings
Charleston’s historic buildings are a valuable remnant of the city’s rich history. Preserving these cultural landmarks is a way of commemorating the past and recognizing and respecting history. In addition to being a hugely important job, building preservation is also complex and involves historians, archaeologists, builders, and architects working together on single projects. Not only does building preservation allow the general public to better appreciate and learn about history, but it’s also a sustainable practice that lowers the city’s environmental and carbon footprint.
Charleston’s historic buildings offer aesthetic interest and valuable insight into the city’s rich past. Heyward-Washington House and the Huguenot Church are just two historic buildings that showcase Charleston’s charming character.