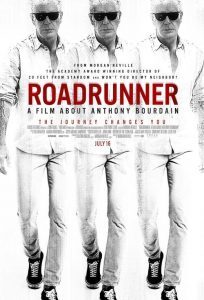 On Sunday, July 18th, the Terrace Theater on James Island will host a panel discussion and screening for Roadrunner: A Film About Anthony Bourdain. The event begins with a reception at 6 pm.

The film, which begins at 7:15 pm, will be followed by a panel discussion with chefs and culinary influencers from the Charleston area. Buxton Books will be onsite selling copies of Bourdain’s books.

Bourdain was a celebrity chef, author, and television host that was best known for his work on the hit television shows No Reservations and Parts Unknown, and the New York Times bestselling book Kitchen Confidential. He died by suicide in June 2018.

Charleston was the featured city in two episodes of Bourdain’s shows, including his memorable visit for Season Six of Parts Unknown. The episode included Bourdain dining at the Waffle House on Savannah Highway and enjoying dinner at Husk with Chef Sean Brock and actor Bill Murray.

Roadrunner: A Film About Anthony Bourdain is an intimate, behind-the-scenes look at how an anonymous chef became a world-renowned cultural icon. From Academy Award-winning filmmaker Morgan Neville (20 Feet From Stardom, Won’t You Be My Neighbor?), this unflinching look at Bourdain reverberates with his presence, in his own voice and in the way he indelibly impacted the world around him.

Tickets can be purchased here. Terrace Theater is located at 1956D Maybank Highway.
–

The Sistine Chapel is Coming To Charleston