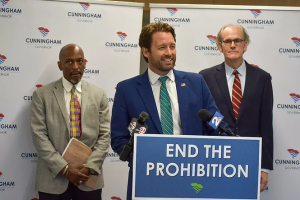 At a press conference in Charleston on Monday, Joe Cunningham released his plan to end the prohibition on marijuana in South Carolina. The plan calls for legalization for recreational and medical use, as well as expungement of records for marijuana-related offenses. South Carolina is currently one of only 14 states with a blanket ban on marijuana.

“There are countless reasons to provide our citizens with a safe and legal marijuana option,” said Cunningham. “Legalizing marijuana would free up our law enforcement to focus on more serious crimes and more effectively tackle our state’s record-high murder rate. It would be a game-changer for people in South Carolina with debilitating health conditions. And it would generate tens of millions in tax revenue to finally provide critical funding for our state.”

“But simply legalizing marijuana is not enough,” Cunningham continued. “We must also address the excessive marijuana convictions that have held South Carolinians back for far too long. We should expunge the records of anyone convicted of a low-level marijuana-related offense and give these people a second chance at life.”

“The people are no longer divided on this issue,” Cunningham said. “It’s the politicians that haven’t come around. Politicians like Henry McMaster who have spent their entire career perpetuating the myths about marijuana, scaring people into thinking it’s more dangerous than it is – and worst of all – keeping it out of the hands of the people who need it most. I think it’s time to tell the truth. Be honest. This governor might be stuck in the past, but I’m not.”

Cunningham announced his run for Governor in April and is currently on a 46-county tour of the state.