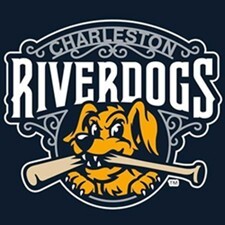 Opportunity kept on knocking for both the Charleston RiverDogs and Columbia Fireflies on Friday night at Segra Park, but neither team answered for the longest time.  Eventually, the RiverDogs pushed across two runs in the top of the 13th inning to defeat Columbia 7-5 in a game that lasted well over four hours.  The RiverDogs collected their 39th win of the season, giving them the most in Minor League Baseball.

Having been unable to muster a run in any of the first three extra innings, the RiverDogs (39-17) were desperate to take their first lead of the game as the 13th frame began.  Garrett Hiott began the inning at second base and was joined on the base paths by Alexander Ovalles after he worked a walk with one out. Abiezel Ramirez came through with a ground ball single to left field that scored Hiott and put the RiverDogs ahead 6-5.  Michael Berglund followed with a looping single to right that stretched the margin to 7-5.  Brayden Theriot struck out the side in the bottom of the inning to secure the victory.

Each team missed out on several chances to win the contest in earlier innings.  The RiverDogs had the go-ahead run on third base with no outs in both the ninth and tenth innings, but could not cash in as Nathan Webb used big strikeouts to work out of multiple jams.  On the other side, Columbia (28-26) put the winning run on third base in three straight innings, but failed to drive him in.  RiverDogs third baseman Osleivis Basabe twice cut down the potential winning run at the plate.

The Fireflies took an early 2-0 lead on a third inning two-run home run from Matt Schmidt.  Charleston was hitless through four innings, but battled back to tie the game in the fifth via an RBI single from Berglund and run-scoring groundout from Alika Williams.

Juan Carlos Negret launched his fourth home run of the series and 14th of the season in the sixth to once again give the Fireflies the lead at 4-2.  Columbia added an insurance run when Schmidt plated Gage Hughes with a two-out single in the seventh inning.

The RiverDogs pulled even once more by scratching out four singles in the top of the eighth, three of them with two outs.  Diego Infante drove in the first run and Hiott tied the game with a two-run single later in the frame.  Infante, Ramirez and Berglund each finished the night with two hits.

Five RiverDogs pitchers combined for 20 strikeouts, the most in a game since April 16, 2016. Theriot earned the win by pitching the final 2.0 innings and recording five strikeouts.  Angel Felipe held Columbia off the board during the ninth inning and the first two extra frames.  Trey Cumbie also tossed 1.1 scoreless innings while collecting three strikeouts.

Starter Ben Brecht tossed 5.0 strong innings in which he allowed two runs on four hits with a season-high seven strikeouts.  Andrew Gross was first out of the pen and retired the first two batters he faced to stretch his scoreless innings streak to 31.0.  However, Negret’s home run ended the streak two batters later.  Gross’s 31.0 consecutive scoreless innings are the most for any pitcher in Minor League Baseball this season.

The series resumes on Saturday night at 6:35 p.m. as the RiverDogs can guarantee themselves a series victory with a win.  RHP Seth Johnson (3-2, 3.20) will get the start for the RiverDogs against Columbia RHP Adrian Alcantara (2-4, 3.82).