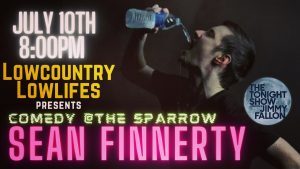 Comedy at The Sparrow, a standup comedy event series, will host the return of Sean Finnerty tonight in Park Circle. The show starts at 8 pm.


Early in his comedy career, Finnerty performed at the Charleston Comedy Festival and now, 7 years later, he is back. He’ll be joined by local favorite Stan Shelby and the club’s host, Josh Bates, host of the Lowcountry Lowlifes podcast.

After 21 years of growing up in Longford, Ireland, Finnerty decided to move stateside and eventually began a career in stand-up comedy. He became the first Irish comedian to perform on the Tonight Show with Jimmy Fallon (2019).

In 2016 Sean moved to New York and started performing at famous venues like The Comedy Cellar, Gotham Comedy Club, Carolines on Broadway, The Stand, and The Friars Club. He has also performed at several festivals including Laugh Your Asheville Off (2017), Edinburgh Fringe (2018), and Electric Picnic (2018), along with making it to the semifinals of the nationwide talent search Stand Up NBC.

Tickets can be purchased for $12 at www.lowcountrylowlifes.com. The Sparrow is located at 1078 E Montague Ave. in North Charleston.