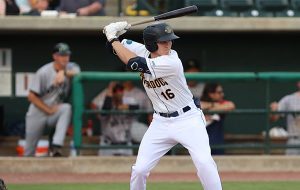 Mead, who was acquired by the Rays in a 2019 trade with Philadelphia, has been playing professional baseball in Australia since he was 16 years old.  This season, Mead played in 46 games with the RiverDogs, compiling a .358 batting average with seven home runs and 35 runs batted in. Mead put together a 13-game hitting steak in June, the longest of the season for a RiverDogs player. He departs with an 11-game hitting streak currently intact.

The native of Adelaide, Australia was named Low-A East Player of the Week by Minor League Baseball for the weeks of June 14-20 and June 21-27.  Originally signed by the Phillies in 2018 as an international free agent, Mead spent each of his first two professional seasons with the Phillies Gulf Coast League affiliate. He hit .285 with four home runs and 19 RBI during the 2019 campaign.

Follow us
Related Topics:charleston riverdogsCurtis MeadTampa Bay Rays
Up Next