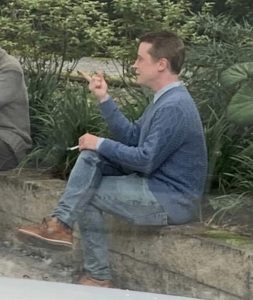 UPDATE: Holy City Sinner has been able to confirm through multiple sources that this is indeed Macaulay Culkin. He was in town to take part in filming for the second season of The Righteous Gemstones.

The Charleston celebrity rumor mill is spinning after a photo of someone that appears to be actor Macaulay Culkin hanging out near a local production set started circulating online. Culkin is (of course) best known for his starring role in the popular Home Alone movies.


The photo (right) was taken on Tuesday by Charleston area resident Catherine Wamer. She said the picture was taken in West Ashley just outside of a TV/movie set, which fueled speculation that the man in the photo is indeed Culkin. The actor has not been officially attached to any current productions filming in town, but that doesn’t necessarily mean he won’t end up in one.

So, what do you all think? Is that Macaulay relaxing in the Holy City?