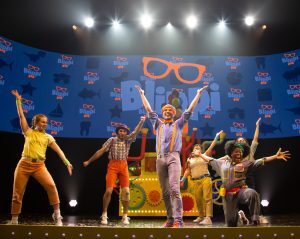 Children’s YouTube sensation Blippi is coming to the North Charleston Performing Arts Center on September 9th. Blippi The Musical is set to bring the vivacious, energetic, and educational children’s character from the screen to the stage for an all-ages extravaganza of fun, dancing, singing and more.

Tickets for Blippi The Musical go on sale Friday, July 9th at 10 am at Ticketmaster.com or in person at the North Charleston Coliseum Advance Ticket Office.

Blippi’s first tour is bringing the fun and antics of his beloved adventures to the stage, to provide an interactive, family-friendly show unlike anything else out there. Blippi’s appeal lies in his wonder and in the way he looks at the world. He’s taught millions of kids how to count, colors, letters, and much more. In just a few years since his inception, Blippi has become one of the most popular YouTubers worldwide, with over 200 million views per month and billions in total across 139 countries and 7.4 million followers.

Stevin John is the creator of Blippi and acts as the writer and creative force behind the Blippi character.  Stevin John does not appear in the live show. Now that Blippi has evolved as a character, he is excited that a dynamic stage performer has been cast as Blippi to entertain and thrill audiences across all of the tour markets.

In an interview with Billboard Magazine, Stevin John added, “I won’t be on the road, but I am obviously extremely involved with the whole process.”