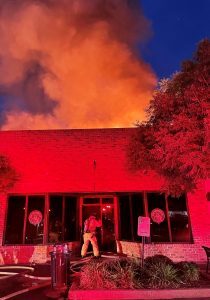 The Charleston County Consolidated Dispatch Center received a 911 call at 5:34 am this morning reporting a structure fire at The Bearded Ax in North Charleston (1077 E Montague Ave.). North Charleston, Charleston, and St. Andrews Fire Departments responded to the call.

According to North Charleston Deputy Chief Stephanie Julazadeh, the first crew to arrive reported a heavy fire coming from the back of the business. The blaze was contained to the one building.

An investigation into the origin and cause of the fire is being conducted. No injuries have been reported.

The Bearded Ax posted on Facebook that the roof of the bar caught on fire and “almost everything in the bar was lost.” You can see their full post below: