FORT WAYNE, Ind. – The South Carolina Stingrays put 27 shots on goal but Fort Wayne Komets’ goaltender Dylan Ferguson kept them off the scoreboard in the third period to lead his team to their first Kelly Cup Championship with a 2-1 win in Game 4 in front of a sellout crowd on Friday night at the Allen County War Memorial Coliseum.

Stingrays forward Justin Florek had the lone goal for his team in the defeat, while SC goaltender Hunter Shepard stopped 23 shots in a losing effort.

Fort Wayne’s Stephen Harper scored both goals in the game for the Komets and was later named the ECHL’s Playoff MVP after finishing the postseason with 13 points on six goals and seven assists.

A defensive first period saw each team held off the scoreboard, but spectacular saves from both Ferguson and Shepard provided highlight reel moments in the opening 20 minutes.

After a South Carolina chance that was inches from crossing the goal-line was turned away by Ferguson, the Komets rushed down the ice and Harper converted on a rebound chance from in tight to make it 1-0 at 8:16 of the second period. 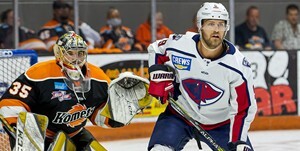 Harper would pad the lead at 15:30 of the second with a one-timer from the back door to extend Fort Wayne’s lead to 2-0.

Florek’s strike made it 2-1 just before the end of the middle frame at 17:56 and came with assists by defender Max Gottlieb and captain Andrew Cherniwchan. The veteran attacker batted the puck out of the air and past Ferguson to put SC down by one at the start of the third.

The comeback effort from South Carolina was cut off by Ferguson and the Fort Wayne defense in the final frame, holding the Rays to just three shots in the last stanza.

SC finished with a shots-on-goal lead of 27-25 in the game. Neither team capitalized on the power play either with Fort Wayne finishing 0-for-2 and the Stingrays ending at 0-for-1.

The Stingrays will begin the 2021-22 season at home at the North Charleston Coliseum for Opening Night on October 23 against the Greenville Swamp Rabbits at 6:05 p.m.