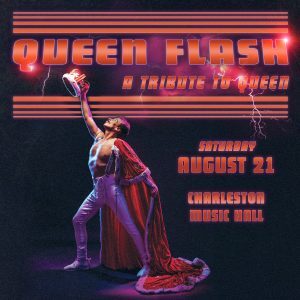 The Charleston Music Hall will present Queen Flash: A Tribute to Queen on Saturday, August 21st. Frontman Johnny Zatylny, a Freddie Mercury look-a-like and sound-a-like, has been captivating audiences by carrying on the musical tradition of the legendary singer since 2000. His amazing likeness with the original, matches his perfect performance of Queen songs both through his voice and his unmistakable stage presence.

This 6-piece Queen tribute is known for their high energy shows that feature a theatrical representation of the real Queen concerts. It captures the essence of a band that transformed the music industry and set lofty standards for those who followed.

Doors open at 7 pm and the show starts at 8 pm. Click here for ticket information.
–

Follow us
Related Topics:charleston music hallQueenFlash: A Tribute to Queen
Up Next

Inaugural Budweiser Freedom Fest Being Held at The Cruise Terminal

Shakey Graves Returns to the Music Hall on November 9th