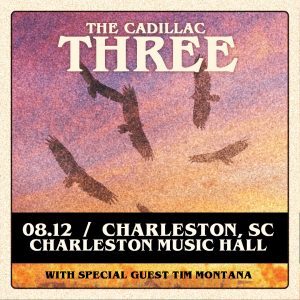 The Charleston Music Hall announced that The Cadillac Three w/ special guest Tim Montana will perform at the downtown venue on Thursday, August 12th. Doors open at 7 pm and the show starts at 8 pm.

When it comes to straddling the line between rowdy country music and rebellious hard rock, no one does it better than The Cadillac Three. Name another band that can play a country festival with Florida Georgia Line or Keith Urban one day and then jet off to the U.K. to share the stage with Metallica or Slayer the next.

On the Nashville trio’s long-awaited fourth album, they push their country, hard rock, and southern rock bona fides to the limit while also introducing elements of funk and soul. The result is a sound that can only belong to The Cadillac Three — one they’ve christened Country Fuzz. You can get a taste of this sonic mixture in August.

Shakey Graves Returns to the Music Hall on November 9th

Flogging Molly to Perform at the Firefly Distillery this October