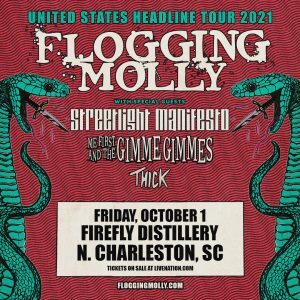 Flogging Molly, the popular Irish-American Celtic punk band, will perform at the Firefly Distillery on Friday, October 1st. The band will be joined on stage by Streetlight Manifesto, Me First and the Gimme Gimmes, and Thick.

Here is some info about the support acts: