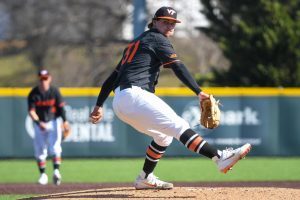 The Tampa Bay Rays transferred 2020 second round pick Ian Seymour from extended spring training to the Charleston RiverDogs active roster on Tuesday morning. The left-handed pitcher, who will be making his professional debut, was listed as the #22 prospect in the Rays farm system by MLB Pipeline in the publication’s pre-season rankings. The team also placed shortstop Osleivis Basabe on the 7-day injured list, retroactive to June 26th, and transferred pitchers Matthew Peguero and Graeme Stinson to the GCL.

Seymour went undrafted after a dominant prep career at St. John’s Shrewsbury High School in Massachusetts that saw him named to the all-state team three times. As a senior, he posted a 4-0 record with a miniscule 0.48 earned run average on the mound to guide his team to a state title.  Seymour also hit .380 and drove in 52 runs at the plate over his high school career.

The 22-year-old was a workhorse over his first two seasons at Virginia Tech, making 13 starts as both a freshman and sophomore.  In each of those campaigns, he averaged more than a strikeout per inning.  Seymour made a big impression on scouts during his time with the Yarmouth-Dennis Red Sox of the Cape Cod League in 2019.  In five starts, the New England native struck out 39 hitters in 25.1 innings and finished with a 2.48 ERA.

Seymour’s start to the COVID-shortened 2020 season with the Hokies was equally as impressive.  In his first four starts of the season, he was 3-0 with a 2.21 ERA and struck out 40 batters in just 20.1 innings.  Opponents were hitting a meager .181 against him.  At the end of his career in Blacksburg, Seymour ranked in the top seven at Virginia Tech in career starts, strikeouts, strikeouts per nine innings, ERA, opponents’ batting average and pickoffs.

The Rays took Seymour with the 57th overall pick in the 2020 draft. He participated in the Rays fall instructional league camp after the cancellation of the Minor League season. Seymour is scheduled to start for the RiverDogs on Thursday night in Kannapolis.

The RiverDogs return to action on Tuesday night at 7 pm with the opening contest of a six-game road series in Kannapolis.  An audio broadcast of all 120 RiverDogs games this season is available at riverdogs.com.