The South Carolina Stingrays scored four times during the second period and defeated the Fort Wayne Komets in Game 2 of the Kelly Cup Finals by a score of 4-2 to even the series at one game apiece on Sunday night at the Carolina Ice Palace.

Forward Max Novak led the way for South Carolina with a goal and two assists, while Cole Ully had two points with a goal and an assist and goaltender Hunter Shepard turned aside 20 saves to earn his seventh victory of the postseason. 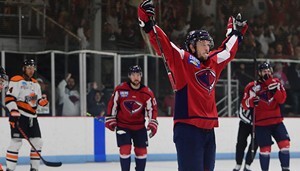 Neither team was able to strike in a defensive opening frame, despite SC outshooting Fort Wayne 10-6 and the two teams headed to the middle period scoreless.

Novak broke through at 2:30 of the second with his fourth of the playoffs, burying a shot past goaltender Dylan Ferguson on the power play from Ully and Justin Florek to make it 1-0 Stingrays.

The Komets answered just 18 seconds later at 2:48 to tie things up at 1-1 when Anthony Nellis scored on a rebound at the side of the SC net.

Less than four minutes later the Rays grabbed the lead right back when Novak hit forward Dan DeSalvo with a pass in the slot for a quick wrist shot that beat Ferguson up high and made it 2-1 SC. DeSalvo’s third of the playoffs came at 6:28 of the second.

Ully made it 3-1 later in the frame after Novak and Matthew Weis were able to win a battle for the puck along the boards. The winger used a shot from the right circle to beat Ferguson at 16:22 for his fourth tally of the postseason.

Once again, a Fort Wayne response 18 seconds later cut the lead down to 3-2 as the visitors capitalized on a goal-mouth scramble that saw Stephen Harper credited with the tally at 16:40.

But the Stingrays quickly had an answer of their own 38 seconds later when Caleb Herbert buried a rebound off a shot by Tyler Nanne at 17:18 to make it 4-2. Defender Zach Malatesta recorded the second helper on the play, which was the second goal in as many games in the series for Herbert.

The last three goals of the period were scored in under a minute of game time, which set a new Riley/Kelly Cup Finals record for the fastest three goals by both teams.

In the third, South Carolina clamped down defensively and kept Fort Wayne off the scoreboard. The Komets managed just seven shots on net during the final frame while in search of a comeback.

Ferguson suffered the loss, stopping 26 shots in a losing effort for his club. Novak’s tally was the lone man-advantage strike of the game as the Rays finished 1-for-4 on the power play while Fort Wayne was 0-for-2. Overall, SC outshot the Komets 30-22.

The series, now tied 1-1, shifts to Fort Wayne for Game 3 on Wednesday night at the Memorial Coliseum at 7:30 p.m. Game 4 will be on Friday evening in Fort Wayne at 8 p.m.