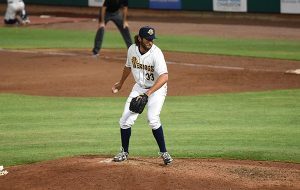 Charleston RiverDogs infielder Curtis Mead has been named the Low-A East Player of the Week and reliever Andrew Gross the circuit’s Pitcher of the Week for the week of June 21-27 per a Minor League Baseball announcement on Monday afternoon. Mead received the honor for the second consecutive week.  The pair led the RiverDogs to a 5-1 record against Augusta during a six-game series at Joseph. P. Riley, Jr. Park. The RiverDogs have had three players honored with weekly awards this season, as the pair joins pitcher John Doxakis in that category.

The 20-year-old Mead played in five of the six games against the GreenJackets, compiling a .450 batting average over 20 at bats.  He recorded five doubles, drove in seven runs and walked three times.  Mead also stole a base and scored four runs in the set.

The native of Adelaide, Australia, has been one of the most consistent and productive hitters in the league all season. He leads the Low-A East with 56 hits and 19 doubles, is second in extra-base hits and total bases, tied for fourth in batting average and tied for sixth in RBI.  He has recorded at least one hit in 30 of the last 33 games, posting a .376 batting average during that span.

Mead was acquired by the Tampa Bay Rays in a 2019 trade with the Philadelphia Phillies.  Originally signed by the Phillies in 2018 as an international free agent, Mead spent each of his first two professional seasons with the Phillies Gulf Coast League affiliate.  He hit .285 with four home runs and 19 RBI during the 2019 campaign.

The 24-year old Gross worked twice out of the bullpen this week, compiling 6.0 scoreless innings of work.  During those 6.0 innings, the right-hander allowed just one baserunner while striking out four opposing hitters.  He has now posted 27.0 consecutive scoreless innings, the longest active streak in Minor League Baseball.  Gross owns a 3-0 record and miniscule 0.92 earned run average in 13 appearances for the RiverDogs.  The opposition is batting just .181 against the Phoenix, AZ native.

The Rays selected Gross in the 39th round of the 2019 MLB Draft out of Texas-Arlington. He made 20 relief appearances for shorts-season Hudson Valley during the 2019 campaign, posting a 1-4 record and 3.41 ERA.  In 29.0 innings he struck out 31 opposing hitters and allowed a .246 batting average against him.

The RiverDogs return to action at Atrium Health Ballpark in Kannapolis on Tuesday night at 7:00 p.m.  The six-game road series will be the first meeting of the season between the RiverDogs and Kannapolis Cannon Ballers.  The RiverDogs currently lead the Low-A East’s South Division by five games over Columbia.

Stingrays Strike Back To Even Finals Series