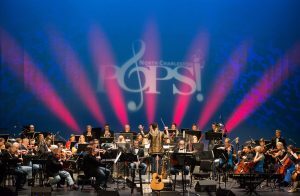 The North Charleston POPS! are back for the final concert of the season, “Music of the Knights,” on Saturday, July 17th at the North Charleston Performing Arts Center. The concert, featuring three Broadway vocalists, will celebrate your favorite songs from three of Britain’s most successful song writers of all time: Sir Paul McCartney, Sir Elton John and Sir Andrew Lloyd Webber.

Come sing along with the North Charleston POPS! as they perform “Maybe, I’m Amazed,” “Crocodile Rock,” “Phantom of the Opera,” “Goodbye Yellow Brick Road,” “Hey Jude,” and many more.

“From Broadway to the top of the pop charts, these three musical geniuses have created an incredible legacy,” said Nick Palmer, North Charleston POPS! Conductor and Music Director. “Just think of the songs: ‘Memory’ and ‘I Don’t Know How to Love Him,’ to ‘Yesterday’ and ‘Hey Jude’ to ‘Your Song’ and ‘Circle of Life,’ these three composers have written some of the most memorable music of the last 50 years. We are joined by three amazing Broadway vocalists for an exciting conclusion of our ninth season.”