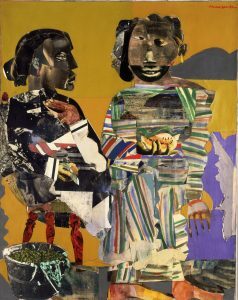 The Gibbes Museum of Art will present Romare Bearden: Abstraction, a major traveling exhibition organized by the American Federation of Arts (AFA) and the Neuberger Museum of Art of Purchase College, SUNY. On view at the Gibbes from October 15, 2021 – January 9, 2022, the exhibition presents important yet rarely seen works from American artist Romare Bearden’s prolific career. Bearden, born in Charlotte, N.C., is recognized as one of the most creative and original artists of the 20th century. The traveling exhibition, which debuts at the Gibbes before presentations at venues across the country, will be on display in the museum’s Galleries 8 & 9 on the museum’s third floor.

“We’re thrilled to serve as the first venue for this significant traveling exhibition, especially as the only southern stop on this tour,” said Angela Mack, the Gibbes Museum of Art’s executive director. “Romare Bearden is an exceptional artist influenced by his life experience as an African American from the rural South. At the Gibbes, we are always looking to exhibit artists who have diverse stories to tell and look forward to introducing this revelatory body of Bearden’s work to our community.”

“Romare Bearden is one of the 20th century’s great American artists,” said Pauline Willis, Director and CEO of the American Federation of Arts. “While Bearden’s significance is recognized by the public and art establishment alike, the many layers of innovation within his body of work are relatively unknown. It is with enormous pleasure that the American Federation of Arts presents the important traveling exhibition Romare Bearden: Abstraction that is valuable to scholars and will also bring joy and enrichment to audiences across the United States, reaching from the American South to the Midwest and the Pacific Northwest.”

According to the exhibition curator, Dr. Tracy Fitzpatrick, “Prior to this exhibition, very little substantive scholarly attention had been paid to the body of work that directly precedes the works for which Bearden is best known. Romare Bearden: Abstraction corrects that omission by providing the first substantive and scholarly examination of this extraordinary non-representational, large-scale stain paintings and mixed media collages important body of work. The project contributes to the development of alternate storylines around the dominant narrative of post-war abstraction while at the same time revealing, for the first time, the roots of the body of work for which Bearden is best known.”

Romare Bearden was born in Charlotte, North Carolina in 1911. In 1914, his parents relocated the family to Harlem as part of the “Great Migration,” during which many southern-born African Americans fled north to escape the Jim Crow South. Bearden began his training in the 1930s, studying art alternately at New York University, Boston University and the Art Students League under the tutelage of George Grosz. This diversity of influences contributed to a rich artistic education, and by 1940, Bearden secured his first solo show in New York.

With some 55 paintings, works on paper and collages, Romare Bearden: Abstraction is the first exhibition to fully examine and contextualize the artist’s significant body of abstract work. Bearden’s extraordinary abstract watercolors, collages and stain paintings were executed mainly between his return to New York from Paris in 1950 and approximately 1964. The abstractions are striking in their variety and scale, with the artist freely employing diverse techniques to realize his unique vision and creating works ranging from under three inches tall to nearly six feet tall. Watercolors and oil paintings from the mid-1950s show his continued devotion to landscapes through abstraction. Large stain paintings—with marbleized effects, paint splatters launched from above the canvas or curving lines showing the influence of traditional Chinese calligraphy—are a high point and display his experimentation with unprimed canvas, a pursuit shared with other artists of the period. Created with segments cut from paintings and affixed to painted boards, the large collages are distinctive for their powerfully defined shapes.

Some of Bearden’s abstractions have entered public and private collections. Many, however, have remained in storage since they were first exhibited in the 1950s, while others have never been shown until this exhibition. Romare Bearden: Abstraction sheds new light on this remarkable artist’s stylistic and technical production and contributes to the development of alternate storylines around the dominant narrative of post-war abstraction. The Gibbes’ exhibition includes pieces on loan from the Whitney Museum of American Art, The Museum of Modern Art, The Guggenheim Museum and the private collection of Walter O. Evans.

The exhibition is curated by Tracy Fitzpatrick, Ph.D., Director of the Neuberger Museum of Art and Associate Professor of Art History at Purchase College, SUNY. She has written and taught widely on American art of the 20th century. Her exhibitions include When Modern Was Contemporary: The Roy R. Neuberger Collection (2014); American People, Black Light: Faith Ringgold’s Paintings of the 1960s (2010); and Hannah Wilke: Gestures (2009).

Romare Bearden: Abstraction is organized by the American Federation of Arts and the Neuberger Museum of Art, Purchase College, SUNY. The national tour of Romare Bearden: Abstraction is sponsored by Morgan Stanley. Additional support for the exhibition is provided by BlueCross BlueShield of South Carolina, Liberty Hill Capital and Lynch Cracraft Wealth Management of Raymond James.

To learn more about this exhibit, visit www.gibbesmuseum.org.

Follow us
Related Topics:gibbes museum of artRomare Bearden
Up Next